Teaching Photography to Tweens on the Navajo Reservation 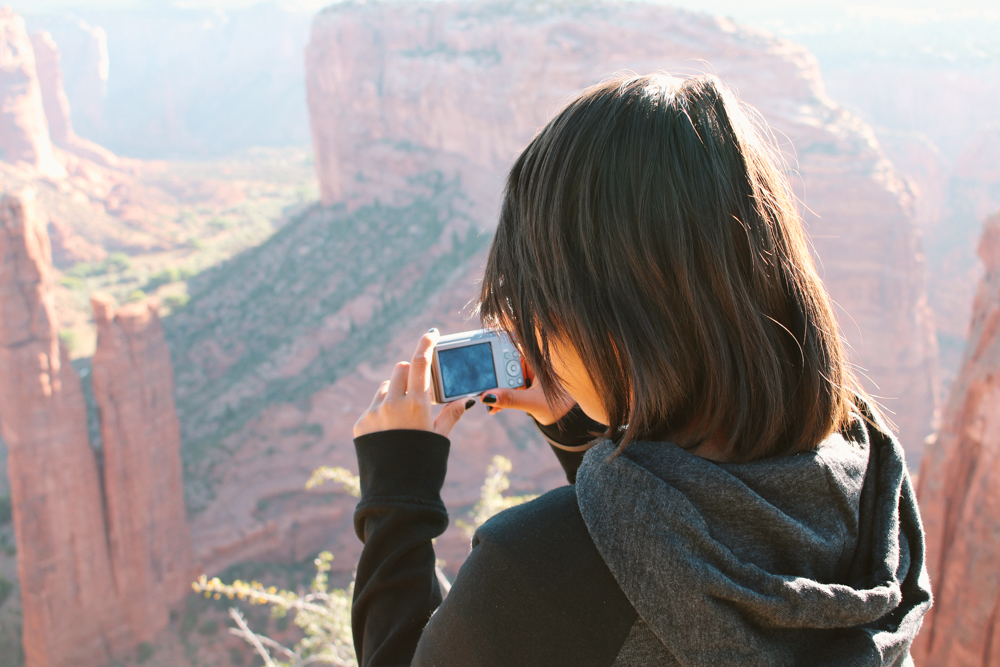 It sets up like a movie….”a Greyhound bus pulls up to a stop at the edge of a small town… a dry, treeless land on a warm summer night. Tumbleweeds slowly go rolling past. He grabs his pack and ambles down the dusty bus steps with a bit of nerves, and a lot of good intentions.”

Kieran Minor had left his family and friends and had set out for a volunteer project on the Navajo Reservation (Rez) in Chinle, Arizona. The town name means “flowing out” in Navajo—referring to the water flowing out from the Canyon de Chelly—but maybe the spirits were there with him, guiding his work, helping with the flow of communication and creativity, and of empowerment in this red rock land where the backdrop is set up like a cowboys and Indians western.

He wanted to make a difference, to connect with others. He found the Do Good as You Go website and liked what they had to offer—feet on the ground volunteer projects with no associated fees. He inquired about the opportunity about working with Chinle schools, and in less than two weeks he was telling his family about the exciting opportunity. “ I was immediately interested in Do Good as You Go because they were one of the only organizations I could find (at least, working in areas I wanted to go) that offered a real, legitimate connection and opportunity to volunteer without making you pay out of pocket. They leave the volunteer to their own devices, providing a baseline and a blessing, so that they may run with it and make the experience their own”, Kieran shared.

The Rez and the area had intrigued Kieran—and his hunch was right—”It is one of the only places in the United States you can go that feels like going abroad. Especially being from the forested Northeast, it was a dramatic change: endless sky, beautiful mesas, forests of bush, mountains, and (particular to Chinle) one of the most historical and stunning canyons in the world. “The language and culture is different and distinct, and totally ingrained in the landscape. There is no other place you can go three hours from the nearest city (Flagstaff or even Albuquerque) that is so strikingly different from the world around it.”

He had selected a 4-day photography workshop with Rez “tweens”- a project likely considered challenging by adults at any locale. Groups of young teenagers sharing cameras, collaborating on projects? You have to be kidding. On the contrary, “almost immediately, I was moved by the devotion and dedication many of them showed. They moved past the awkward technicalities of being a “tween” and really committed their time to making something to impress me, their peers and themselves,” Kieran countered. 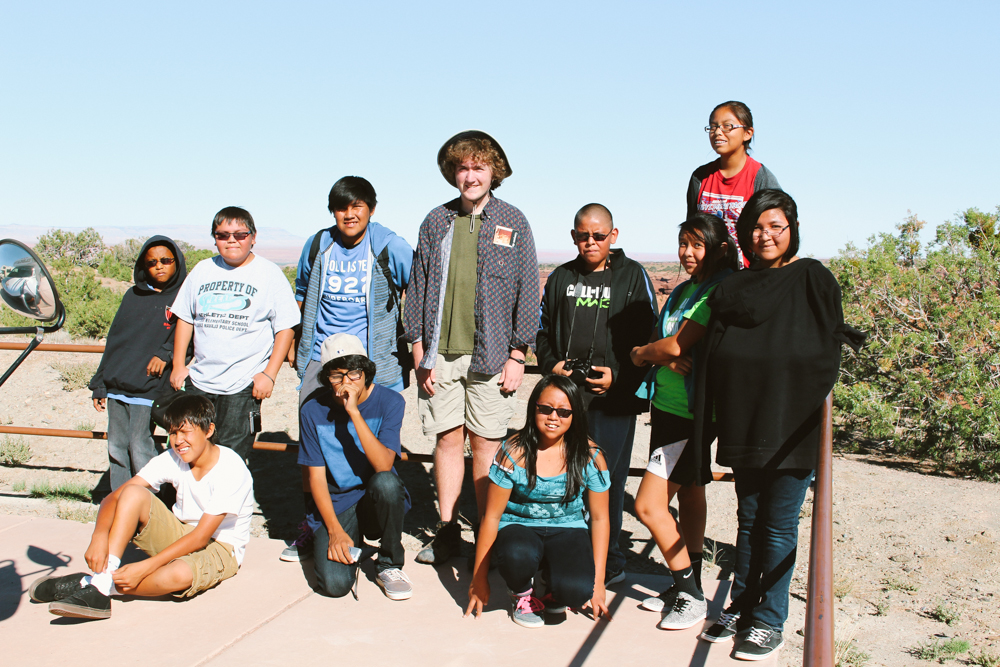 Kieran with photography students from a local middle school in Chinle, Arizona 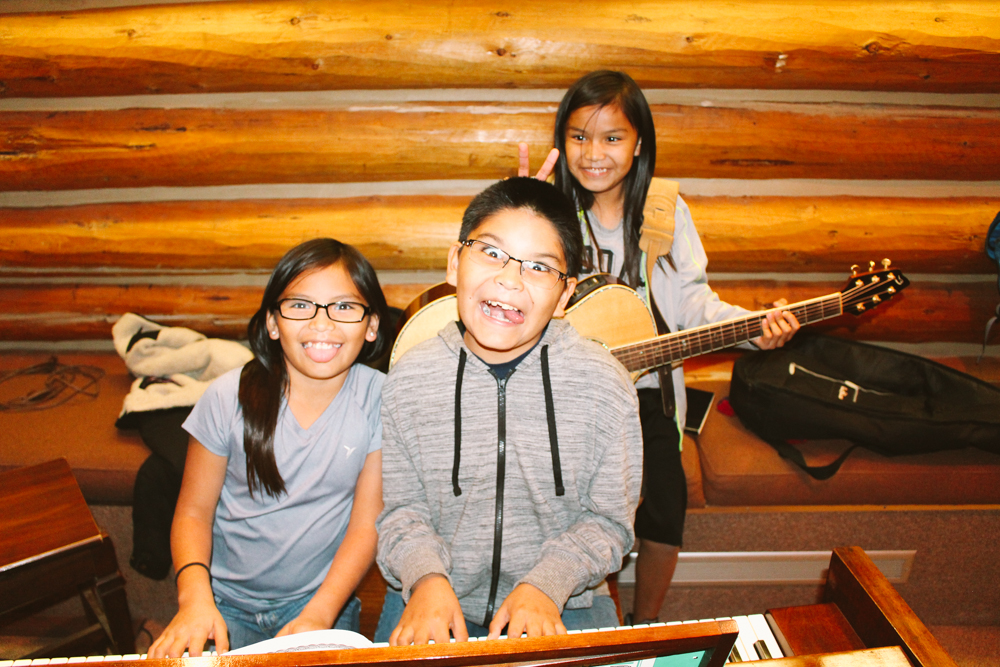 Kieran´s students getting silly in a music workshop

The kids really appreciate something creative and fun to do. The curriculum on the Rez has evolved over the years to combine national mandates and Navajo custom, but there is a deficit when it comes to the creative arts. Many of us are so blessed to have extracurricular activities near to us: music lessons, dance classes, orchestras, plays and musicals, etc. This is something that is hard to come by in many areas of the Rez, so when someone comes through the share their knowledge of such things with the kids, they really latch onto it. “I learned even the smallest opportunity can yield some remarkable work,” he shared. “The biggest takeaway or effect I saw was the way certain kids totally blossomed when given the chance to do something creative on their own terms. It was amazing how a little twenty-minute introduction could spark a drive for two to three of hours of solid work. I recall three or four kids who did not talk much, or were “awkward” around their peers, branch off at first opportunity to explore things and start viewing the world around them through the eyes of a camera (which was for many of them, in fact, one of the first times they did so),” he added.

Kieran not only helped shape the lives of the tween Navajos in his classes, but was rewarded with learnings and positive impacts to his own life.  Breaking down stereotypes and understanding each other’s perspectives is an outcome in many volunteering opportunities. “My world was reshaped by my time on the Rez, and that what I hope to do in life will be for somebody, something and someplace. Conscious people are needed around the world, and for many such motivated Americans, the work can start at home,” agreed Kieran. 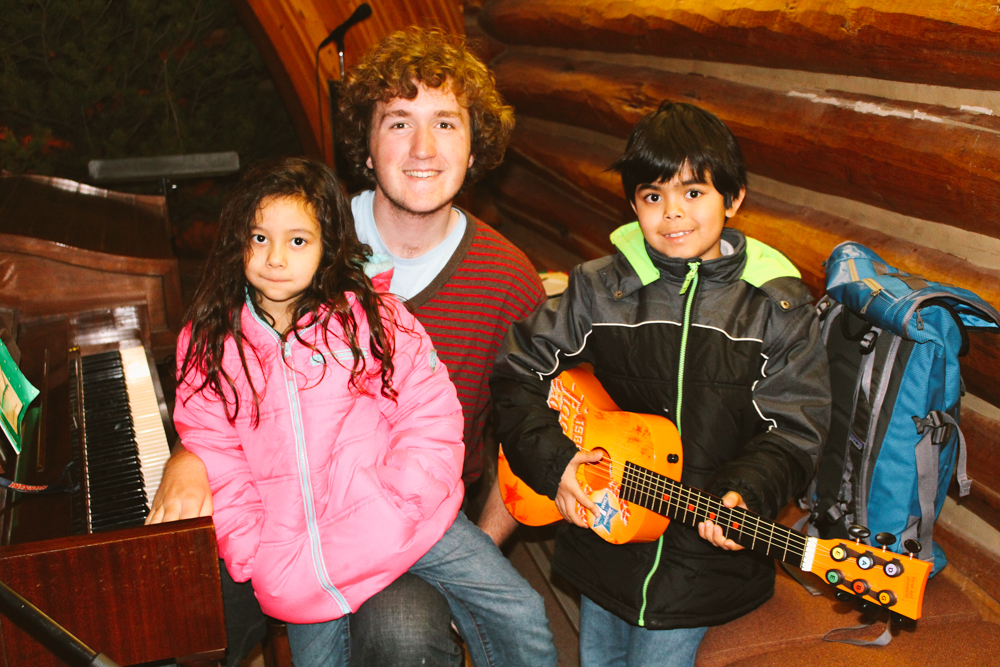 Kieran with two of his music students

After his photography workshops, Kieran extended his time on the Rez, where he taught student music lessons at the local Catholic parish and worked for the National Park Service at nearby Canyon de Chelly. He continues to volunteer and make a difference.

Editor’s Note: Conscious Magazine has teamed up with Carol Hurst of Muskoka Foundation’s Do Good As You Go movement. Carol will shed light on travel and volunteerism. Find out more about Carol in this interview here. Follow the series.

Carol Hurst is originally from St. Louis, Missouri­. Her professional career has focused on Fortune 500 marketing, but now, is happy to represent the thousands of baby­boomers while she shift careers and seek out ways to give back to the world while pursuing my passion for traveling. What she enjoys most about traveling is seeing how people­ live, their beliefs and (especially since she owns a spice store) what they eat and how the food is prepared. Carol is currently involved in grass roots projects for Muskoka Foundation and One Dream Foundation, which seeks to increase the number of enrolled female children in Zambian schools. 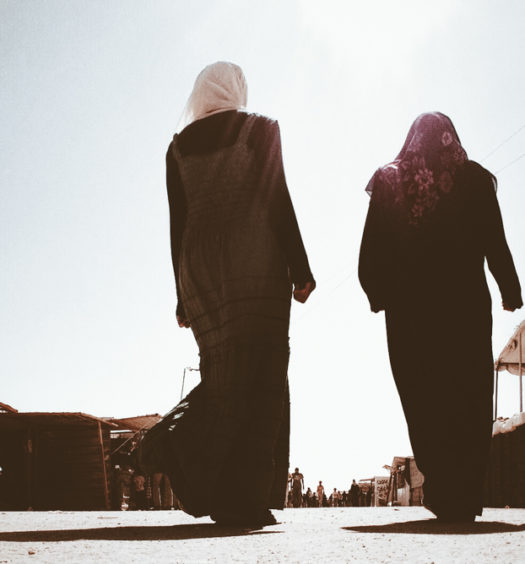