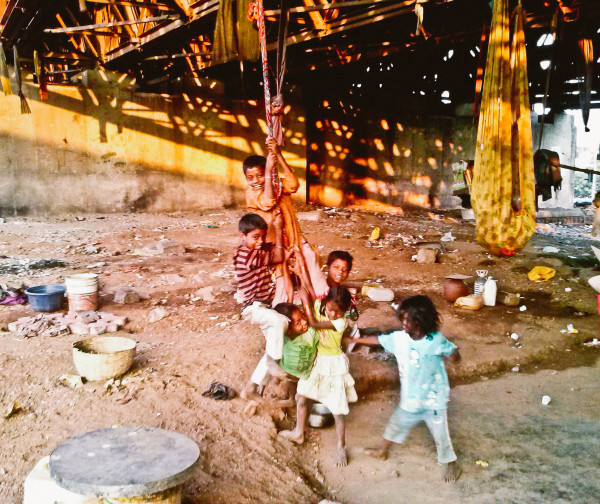 Under the broad flyover (overpass), connecting Chembur with Ghatkopar, is their home, an uneven ground strewn with pebbles, scattered with chicken feathers and trash. The traffic is blaring deafening horns from all directions. The air is full of dust and the smell of rot.

As soon as we reach this settlement, the women surround us excitedly, “Last night…they came in a taxi….they tried to drag out our daughter…. We beat them and then they ran away.” “This is quite common,” says Shashikant Bhalerao, a social worker with Alternative Realities, a not-for-profit organization. “Sometimes, strangers lie down next to a sleeping couple and try to fondle the wife. Sometimes, there is gang rape. The women here can’t even shower with some dignity. People surround them and keep looking.”

Rati, an elderly woman, says, “I have been like this for more than forty years. I have seen my husband and four of my children die here. I saw with my own eyes one of my girls got squashed by a truck right here. We just buried her near that pillar.” She hadn’t yet lost her capacity for tears. Shanti, a middle aged woman, relives her of the memory,

“Most of us came as very young. We keep moving. When the government will throw us away from here, we will have to move again. We had no land back in our village. How could we have survived there?” According to Alternative Realities, there are 150,000 homeless in Mumbai.

One family has a tattered mattress for a bed. The others are just using old plastic sheets. “My sister got married to one of the men here. They just went to the temple and came back,” says Shanti, with a smile. I get lost wondering if anything could be more beautiful and more tragic than a wedding under such poverty. “Here, have some tea!” a teenage girl hands me a small plastic cup. I am startled at this unexpected hospitality.

I notice their meager belongings, all wrapped up in cloth bundles. I ask them how they manage when it rains. “We just move to the spots where there is no water.” But, it is common for the homeless to die from Pneumonia and Tuberculosis, particularly during the rainy season.

At that time of the day, the men had all gone away to work, day jobs: pasting Bollywood posters, digging roads, fixing gutters, cleaning streets; all jobs that the city needs to be done by someone. The women often work as domestic help, if they don’t need to take care of the children. Some are exemplary entrepreneurs, making baskets, charms, brooms, anything they can produce with their meager means.

Abhishek Bharadwaj, the founder of Alternative Realities explains, “In this city of glitz and glamour, the image of the homeless doesn’t fit in. Most people have a negative perception of them as drunkards and lazy beggars. The reality is that they have to work very hard to make a living. But the unorganized nature of their jobs, the unlimited pool of cheap labor always available to replace them, the general perception of being unwanted and the continuous fear of being evicted; all these leave them with little bargaining power.”

Anant, the only man around at that time, “Many days I don’t get any work. On a good day, I can get 200 Rupees. Some days, I just get 50. Look at my fingers.” They were all bloodied from old wounds. “I get them from pulling ropes to carry baskets full of chicken over my head.”

There was an abundance of babies and young children. The very young ones were on their mothers’ laps or inside makeshift cradles hanging from the iron beams of the flyover. One of them had caught jaundice. “No, I didn’t go to the doctor,” says his mother, still in her teens, “I just got this charm as a necklace.” Shanta, a teenage girl adds, “There are many rats here. Some young babies had their fingers bitten off by the rats.”

I am distracted by the kids who have begun swinging from the clothes hanging from the flyover’s beams. I get the attention of Nakul, a boy of five or six, “I don’t go to school. There is so much work. During the day, I have to wash all the dishes and also bring water.” Alternative Realities has built libraries in a few settlements from donated books to arouse curiosity and inculcate a habit of reading.

One lady approaches us to show her photographs, “These are for my ration card application.” She shows all of them one by one, fifteen identical photographs. The ration cards, identity documents required to buy subsidized food under a state scheme, are prized possessions of the homeless.

“We need to ensure that they have proper documents like ration cards, election cards, etc. so that they can access the Public support schemes for the urban poor,” says Abhishek “We are also campaigning for shelters for them.”

The sun is setting. The women are patiently waiting for their men. The children, who rarely hear a kind word from the outside world, are still swinging. The teenage girls are sweeping the area around their sheets, trying to keep it as clean as is possible in this setting. The traffic intensifies. Mumbai is dreaming of becoming Shanghai, hoping for more towering skyscrapers, neat boulevards and exclusive public spaces. The homeless are dreaming of a ration card, a small shelter, a night without fear of molestation and an escape for their children from under the flyovers. Will the city’s dreams carry along theirs too?

From the Editor
At Conscious, we are inspired by remarkable people, and so we set out to tell stories that highlight real human interactions and human dignity. You can read more stories like this when you pick up your copy of Conscious Magazine. Subscribe today via our Conscious Shop and subscribe to Conscious Updates

Writer, traveller, and photographer; Shivaji Das is the author of ‘Journeys with the caterpillar: Traveling through the islands of Flores and Sumba, Indonesia’. Shivaji Das was born and brought up in the north-eastern province of Assam in India. He graduated from the Indian Institute of Technology (IIT), Delhi, subsequent to which he completed his post-graduation from the Indian Institute of Management (IIM), Calcutta. He is presently working as a management consultant in Singapore. Shivaji’s writings have been published in various magazines such as TIME, Asian Geographic, Venture Mag, Jakarta Post, Hack Writers, GoNOMAD, etc. He has also given talks on the culture of Flores and Sumba in Singapore, Morocco, China, Indonesia and Brazil. His photographs in collaboration with his wife, Yoland Yu, have been exhibited in the Darkroom Gallery, Vermont (USA), Kuala Lumpur International Photography Festival (Malaysia), the Arts House (Singapore), and the National Library (Singapore). Besides traveling, Shivaji also takes an active interest in migrant issues and eradication of underage poverty and is associated with Singapore based organization Transient Workers Count Too (TWC2).