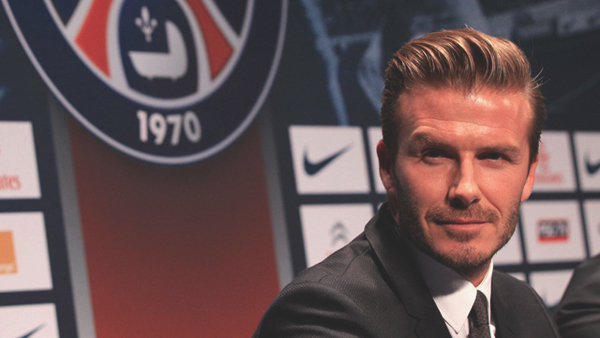 With the beginning of the soccer season this year, many media outlets focus on the latest transfer news, injury updates, and the FIFA World Cup 2014 qualifying matches. However, despite all of this glorious buzz, I still think back and remember how one man stands out among all the rest: David Beckham. Even though Beckham forever changed the soccer world with his retirement announcement in May 2013, he will always be remembered for the countless personal awards, club championship, and international play (such as the Goal That Shook The World). With so many memorable performances on the pitch over the years, it might be shocking to some that Conscious was more impressed by something else Beckham did more recently in his career that caught our attention.

In an unprecedented move, David Beckham recently signed with Paris-Saint Germain (PSG) and decided to donate his entire salary of $3.4 million euros to children’s charities in Paris, France. This gesture of generosity should not go unnoticed, as no other player has ever made such a large and selfless donation. Beckham brought veteran leadership, world class skill, and huge fan base to PSG. However, it is his decision to give to others that stood out amongst all of his success, and it is how I personally will remember Beckham. Not only is he a proven winner on the pitch, but he also has made a conscious choice to use his influence and funds to make the world a better place, which will never be forgotten as an example for all of us. As many will always try to “Bend It Like Beckham“ while playing soccer , we hope they also seek to mirror his charitable awareness, genuine action, and sincere generosity towards those in need.

Additionally, Beckham was awarded the Global Gift Philanthropist Award for his work with UNICEF, Malaria No More UK and the Elton John AIDS Foundation.

More About UNICEF
UNICEF is the driving force that helps build a world where the rights of every child are realized. They have the global authority to influence decision-makers, and the variety of partners at grassroots level to turn the most innovative ideas into reality.  That makes them unique among world organizations, and unique among those working with the young.

More About Malaria No More UK
Malaria No More UK is an innovative charity working tirelessly to end suffering and deaths from malaria. They back the global goal of near zero deaths by 2015. They save lives through high-impact awareness and fundraising campaigns and by making strategic investments in Africa where over 90% of all malaria deaths occur.

More About Elton John AIDS Foundation
The Elton John AIDS Foundation (EJAF) was established in the United States in 1992 by Sir Elton John, and is headquartered in New York City.  In 1993, Sir Elton also established his Foundation as a registered charity in the United Kingdom, headquartered in London.  These two organizations function as separate entities with their own distinct grant-making portfolios, but both pursue the same mission – to reduce the incidence of HIV/AIDS through innovative HIV prevention programs, efforts to eliminate stigma and discrimination associated with HIV/AIDS, and direct treatment, care, and support services for people living with HIV/AIDS.  The Foundation supports this mission through proceeds from special events, cause-related marketing projects, and voluntary contributions (large and small) from individuals, corporations, and foundations.