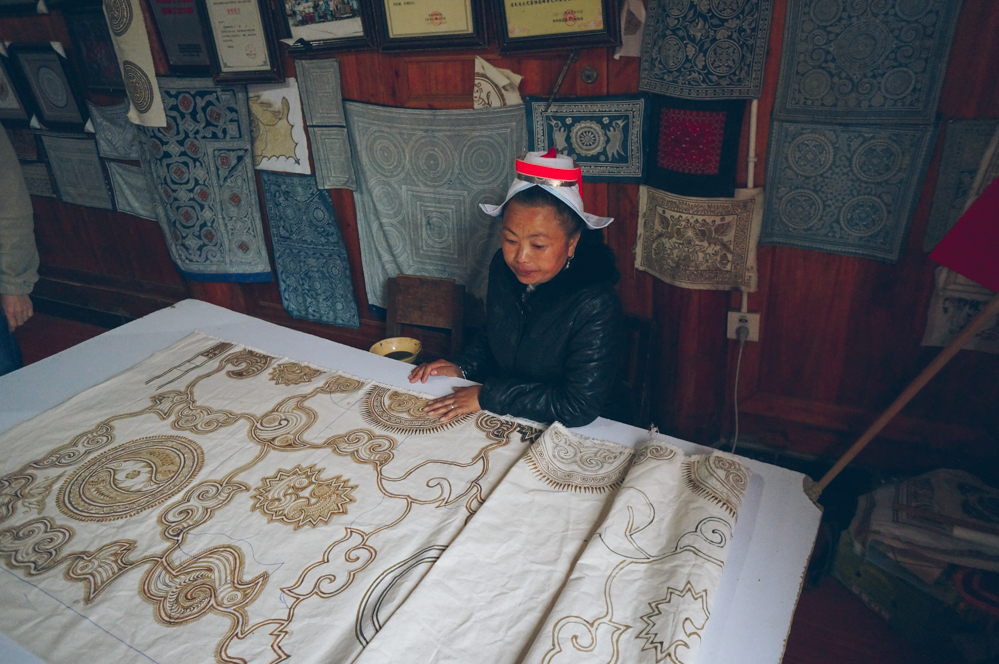 The home workshop of Chiao Me, a female Miao batik artisan from the village of Matang. Photo by Mark Isaacs.

Struggling to uphold its cultural and historical identity in the midst of a modern culture of mass production famous for the tagline: ‘Made in China’

On the banks of the sapphire blue Erhai Lake in the shade of the snow-blessed Cangshan Mountain, two elderly female Bai artisans stitch cotton cloth sheets. They are dressed in checkered shirts, wearing black headdresses embroidered with flowers; their faces crinkled like brown butcher’s paper. Their eyes glint with humor when they ask us for money for photos.

We are in an open courtyard of a tie-dye workhouse in Zhoucheng; an ancient tie-dye handicraft village that used to sell fabrics on the caravan trading routes of the Southern Silk Road during the Dali Empire in 700 AD. The walls are adorned with fabrics elaborately patterned with butterflies, fishes, flowers and dyed in vibrant blues and greens. A young man, hands encased in thick industrial gloves, stirs a limestone-crusted vat of compounded indigo plant matter. It is into this vat that the cotton-cloth is submerged as part of the indigo dyeing process.

Our two butcher’s paper artisans are demonstrating the stitch resistance dyeing style, a process of twisting and stitching fabrics that can take days depending on the size of the material. They remove stitches in another fabric, which opens up a whole new layer of blue and white patterning. Ancient stories preserved in thread and plant matter; the skills of an ancient culture passed on through the finger tips of Bai artisans for hundreds of years. I understand now why we have traveled so far to come to Zhoucheng.

I am with Jessie Helyar and Kartika Putra, two young Australian fashion designers attempting to preserve history through fashion.

“We seek out traditional textile-making skills of ethnic communities around the world and utilize their fabrics in our collections,” Jessie says. “By working with these communities, we hope to encourage and nurture ancient artisan skills.”

Their goal is admirable, but they face an uphill battle. Traditional ethnic communities and their textile making skills are being threatened by a modernized world and its desire for cheaper products regardless of authenticity.

“We know it is a difficult task, but we feel these techniques are too precious to be lost,” Kartika says.

Their fashion label, Wolfress, was founded in 2010 on the dreamy coastline of Ecuador, where the two of them (strangers at the time) were inspired by the alpaca weaves of the local people. A traveler’s daydream was soon turned into reality, as they took the fabrics back to Australia and created their first collection.

“We don’t want to make fashion for fashion’s sake. We want to create garments with stories. We want people to connect with their clothes and with the people who make their clothes,” Jessie says.

Until this year, Kartika (26) was a full-time engineer and Jessie (29) managed a thriving Balmain bar. Now, they are focusing their efforts on making Wolftress into an international label.

“We dream big, and we feel this is our opportunity to take Wolftress all over the world,” Kartika says.

“It’s scary, but I wouldn’t want to do anything else.”

For their latest collection, Jessie and Kartika traveled to the Yunnan and Guizhou provinces of southern China to find the textile designs of the Bai and Miao ethnicities. They discovered China struggling to uphold its cultural and historical identity in the midst of a modern culture of mass production and manufacturing famous for the tagline, Made in China.

“It was a gamble going to China,” Jessie says. “We didn’t know what to expect. We didn’t know if we would find the communities, let alone the right fabrics for a collection.”

Jessie and Kartika first traveled to the Guizho province to find the famous Miao batik designs. It is a rice paddy area, brightened by canola fields and cherry blossom trees. In the home workshop of Chiao Me, a female Miao batik artisan from the village of Matang, we find rich blue cloths hanging from the walls; white honey wax separates the indigo dye from intricate designs shaped by the hand of Chiao Me.

“The Guizhou batik designs are 1,500 years old and are usually representative of a Miao legend or tradition,” our Miao guide, Billy says. He points to a design: a white sun with a flower in the center encircled by fish and butterflies. “In this design, the sun represents life; the fish, fertility; and according to Miao creationist belief, the butterfly is the mother of our human ancestors.”

Chiao Me makes a livelihood from her batik design skills, but she is one of only a few Miao artisans in the area who still do. In a rapidly developing China, it is becoming increasingly hard to preserve ethnic cultures and their traditional lifestyles. Local women make more money in farming. People are moving away from traditional villages in search of better living standards and greater incomes.

Batik design skills are being replaced by factories that computer generate designs and screen print. Despite the importance of the batik trade to Miao culture, a lack of interest in the artisan skills has forced the local artisans to all but abandon their trade and seek other sources of income in order to survive. In west Guizhou, a village called Shitouzhai, referred to by the guides as the hometown of batik, feels like a ghost town. The old statues of women dip-dyeing from the river act as tombstones for the abandoned batik craft.

“It is sad to see such beautiful and important textile skills decline,” Kartika says. “But, it was important for us to see. It drove home to us just how necessary our work is.”

Wolftress utilizes aspects of traditional designs or fabrics in their collections, which modernise the look of ethnic textiles while still staying true to the skills and authenticity of the artisans.

Unfortunately, the intricate designs that brought Jessie and Kartika to China and to the Miao communities in Matang and eastern Guizhou are what make it impossible for them to use in their collections. Chiao Me works within her home and her production scale is limited by the size of her dye vat. It takes her one week to make four meters of a complicated design, and Wolftress can’t utilize such small-scale production in their collections. Wolftress found a better match in the white stone Bai village, Zhoucheng, in the Yunnan province.

The scale of production in Zhoucheng is noticeably larger than in the Miao villages of Guizhou. Bai fabrics are traditionally used for blankets and curtains which means they are already producing larger fabrics than in Guizhou. “The Bai artisans have organized themselves into collectives to produce fabrics on a large scale, so we can purchase fabric by the meter. The designs aren’t as intricate as in Guizhou, but they are as labor intensive,” Jessie says.

The differences between the villages of Matang and Zhoucheng are significant. Zhoucheng benefits from the Yunnan province’s thriving tourism industry. From the first moment you step off the public bus in Zhoucheng, elderly Bai artisans start the sale with cracked smiles and wrinkled eyes. The Ghuizhou province is one of the poorest provinces in China and only emerged from the protective policies of the central government in 1986, when foreigners were finally permitted to visit. While one ethnic community’s textile skills and traditions flourish thanks to the aid of thriving domestic tourism, another community’s traditions wane and lose value.

“We learned that there are ways to preserve traditional ethnic cultures, even in a country developing as quickly as China,” Kartika says. “The difficulty is how to keep these traditional designs relevant and valued.”

Maybe Jessie and Kartika hold the key. As Wolftress grows as a fashion label, they hope to not just work with communities already capable of supporting themselves but to encourage and assist struggling communities in the continuation of their crafts to create a more vibrant textiles future.

Mark is a writer, a community worker, an adventurer, a campaigner for social justice, and author of The Undesirables: Inside Nauru (Hardie Grant, 2014), an account of his work with asylum seekers. He grew up playing football and cricket in safe northern Sydney suburbia. He then spent his adult years traveling to distant locations and writing about them. Mark has published articles with Huffington Post, New Matilda, VICE, Conscious Magazine, Roads and Kingdoms and more. His second book titled Nauru Burning is soon to be released. www.markjisaacs.com

My Life As A Refugee [App]

Read More
My Life As A Refugee [App] 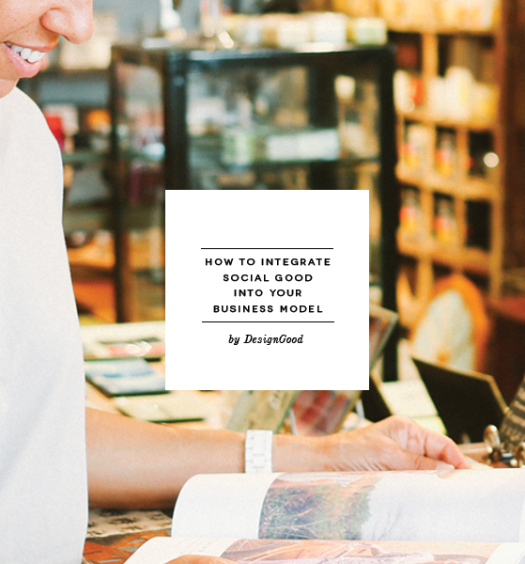 8 years ago
CultureThe ArtsTips / How To's

How To Integrate Social Good Into Your Business Model

Read More
How To Integrate Social Good Into Your Business Model