The Vanity Project – Finance to Fashion and Philanthropy In Between

By Danielle Valente  •  8 years ago 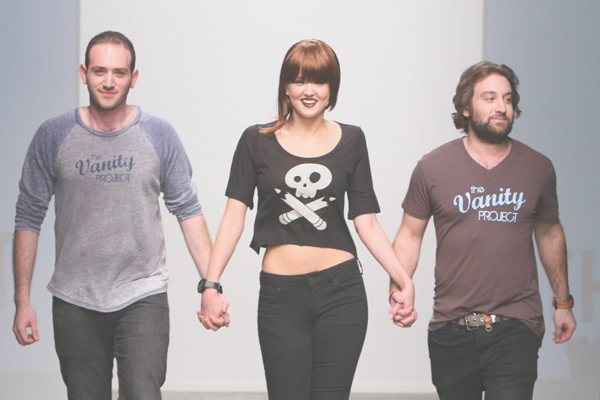 Jason Sochol and Omri Bojko joined hands with a model whose cropped tee shirt sported a cartoon-like skull above crisscrossed pencils, not bones. The trio made its way down the runway as the audience’s applause drowned out punk-rock music. The Vanity Project co-founders raised their arms in unison to a group of photographers and videographers waiting at the end of the runway. Bojko mouthed “Thank you” in between smiles and Sochol gave a head-nod.

The clothing company that just celebrated its one-year anniversary took its next steps into the industry, but neither co-founder could have predicted being on a catwalk during New York Spring Fashion Week.

“I never thought I was going to go into fashion or apparel,” Sochol confessed while at his company’s Sixth Avenue Office.

The skull and pencils logo on the model’s tee is pasted on the office wall, symbolizing Story Pirates, a New York and Los Angeles based organization that acts out stories young children create. It’s not the only insignia decorating the room. There are joined hands representing The Boys and Girls Clubs of Chicago and a small rabbit symbolizing Fiver Children’s Foundation, among others.

These graphics represent “TVP’s” mission: to create non-profit apparel that “people would actually want to wear,” compared to oversized, unappealing tee shirts typically given out at charity events. It donates 51% of proceeds to the organizations it represents.

The meaning behind the clothes is just as significant as the story behind its Northwestern University co-founders, both of whom stumbled into the industry somewhat untraditionally

Even though Sochol’s family participated in service work throughout his life, he never thought he’d work with non-profits full-time, until several experiences swayed him away from the life in corporate America he had originally imagined.

Sochol, the middle of three children, grew up in a Baltimore home where his mother, Lori, was constantly extending her time and efforts to others with the perspective, “What else should I be doing?” It was a lifestyle her children chose to follow.

Sochol’s favorite experience came after college when he began working with Tutoring Chicago, formerly known as the Cabrini Green Tutoring Program. He was assigned to work with sixth-grader Brazil Jenkins, a reserved little girl who became more outgoing with each meeting. Tutoring made Sochol feel obligated to help Brazil scholastically in a way she might not have been exposed to otherwise.

They worked on English and science assignments, but the most significant session came when they were reviewing multiplication tables. Sochol thought it would be best to involve Brazil’s mother in her math studies, a request she declined not because she did not want to, but because she did not know multiplication well enough to help her daughter. Since becoming involved with the program, he couldn’t imagine not working with non-profits.

“No one else is doing it [and] you have the capability to,” he said of his motives.

To this day Sochol and his family continue to volunteer. Now that his parents are based in Connecticut, he discussed their participation in A Better Chance of Westport, which allows gifted inner students from all over the country to attend Staples High School in Connecticut and gain access to a better education. A Better Chance houses the students in a home of resident directors and tutors, which is supported by the community, while participants attend the public or independent school in the area. Sochol and his siblings have become familiar with the children his parents work with and have “gotten close to all of them,” though one teen’s story particularly impacted him.

Ruben, a high school student from San Diego, didn’t attend weekend parties for fear that gatherings of underage drinking would get him kicked out of the program. “He asked me if I saw 60 Minutes that week,” Sochol said. “It was about gang violence and his neighborhood was featured. He said, ‘I can’t go back to that.’’’

These experiences made Sochol seek a career in something other than finance, but they were not his only motives for a switch. His mother, the one who exposed him to this world of social service, soon needed help herself as she was diagnosed with breast cancer while Sochol was living in Chicago.

“I always think of my parents being by themselves in my house with no kids around and [I was] just scared that their life might not be like this anymore,” he said.

Being hours away from his family, Sochol felt there was no way for him to help his mother.

“I was sitting at work all day [thinking], ‘What can I do?’” he said, somewhat flustered. “I need to do something to feel that I am helping her in some way.”

TVP is his way of overcoming that feeling of helplessness; it’s his way of giving back. Lori has won her battle with cancer and continues to volunteer, this time, with her son’s clothing line.

It has been an exciting year for Sochol, but co-founding this project was not without its struggles. He worried about going through savings and succeeding in his new venture, but he felt it was the right time to take this risk.

He would not be sitting in his New York City office today without the help of his college roommate, Bojko, who created the TVP idea.

The duo met in the halls of Northwestern, participating in the same fraternity and study abroad program in Florence, Italy. They would meet for Sunday talks at Filter Coffee Shop on North Milwaukee Avenue to discuss business ideas.

“When I started volunteering, I started accumulating this collection of really bad non-profit tee shirts and I didn’t know what to do with them,” Bojko said. “It didn’t make sense to me that they were spending money on this. I thought ‘There has to be another way to do this.’”

It took awhile before he decided to tackle non-profit apparel.

Originally from Israel, Bojko and his family moved to the States when he was 2 years-old, and he has lived in Northern New Jersey ever since. Growing up, his self-described independent nature led him to consider many careers, though “the money question” was trying to decipher what his dream job would be.

But studying for the LSAT disenchanted him. He had mulled over the idea of getting an MBA, but that wasn’t the proper fit, either. Bojko made his way to a trading firm in Chicago upon graduating from Northwestern.

“I was doing what I thought I was supposed to be doing,” he said.

Up until Bojko was 23, he wasn’t active with non-profits. His most recent volunteer experience at that point was working with an anti-bullying group, Heroes of Conscience, in middle school, which actually invited Gandhi’s grandson in for a lecture. He had left the non-profit world in the past, until several post-college experiences led him back to volunteer work.

“It wasn’t until Jason’s mom got diagnosed with breast cancer that [I] started volunteering,” he said. This took place after the two had graduated college in 2008. Soon, Bojko began working on the fundraising and party planning aspect of his boss’s group, The Fabretto Children’s Foundation.

Suddenly, the long-term goal of working in finance felt foreign to Bojko. He wanted to create a physical product that would make a difference to someone. With that in mind, he tackled a new business venture: TVP.

“We’re doing something that we’re passionate about and changing things,” he said. That’s the end goal and I realized TVP was the best option I had to achieve that goal.”

He experienced what he called the “second day freak out,” wondering if he had made the right decision, but the best way to begin TVP was to just do that: simply begin. Soon he was calling non-profits, figuring out warehouse information, teaming up with graphic designers and web site creators, and learning how to fold a tee shirt just right.

One year later, The Vanity Project works with over 30 non-profits and continues to grow its business, selling all over the country and even out of the U.S. to places like Australia. The duo is looking to work with more organizations, start creating hats and eventually work its way into stores.

“You can really tell when people are into doing good,” said Story Pirates producer Gabriel Jewell. “Those guys are not only turning out quality products, [but] they actually care about making an impact.”

Although it was not originally what Bojko and Sochol had in mind, they found a career that is a true “representation of their beliefs.” Football players and musicians modeled the graphic tees in Studio 59 of Chelsea Piers during Spring Fashion Week. Cameras flashed, models posed, and people became familiar with the meaning behind the clothes.