The TangoTab App – “When you eat, they eat” 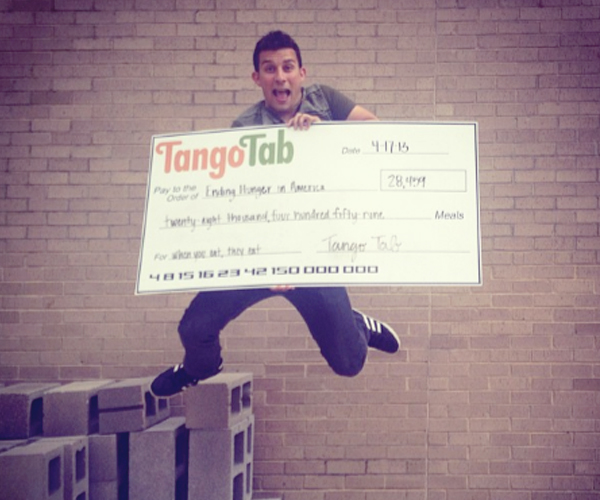 1 in 6 people in North America will go to bed hungry tonight.  TangoTab hopes to solve that problem, one meal at a time.  I had the pleasure to speak to one of the employees at TangoTab at an event they were hosting at Artica Bar; Nick Marino Jr.  Within a few minutes, I was entranced by his passion and the amazing idea of TangoTab.

A company that started in Dallas, Texas by Andre Angel, they have donated over 160,000 meals since their inception.  The idea is simple enough; “When you eat, they eat.”  By downloading the app on your IPhone or Android, the app will show all participating restaurants that are near you and the deals they offer.  These deals range from free appetizers to 50% off of your meal.  You select the deal, which is free, show the offer to your server, and you’re done.  That’s it.  With this simple app, three groups benefit.  The consumer, who gets a great deal at a restaurant they would already go to.  The business, who gets the added promotion.  And of course, those who benefit from the meals that are received from TangoTab.

Each time a meal is redeemed by the users, TangoTab donates a meal to someone in need.  In addition, they go directly back to the city.  If you eat at a participating restaurant in New York City, the meal is distributed in New York City.  Often times, “deal apps” such as Groupon detract from returns for the restaurant. However, TangoTab goes beyond the standard business model and has proven that the establishment can get a 100% return on their investment, so everyone benefits.

If working for such an amazing company weren’t enough, the employees volunteer their own time to help distribute meals.  With such an amazing idea, there is no shortage of partners who work with them.  This includes City Harvest, Soup Mobile, Regional Food Bank of Oklahoma, Allen Community Outreach, Minnie’s Food Pantry, and Northern Illinois Food Bank.

TangoTab is available in Dallas, Oklahoma City, Ft. Worth, and New York City; they are quickly expanding and hope to have a National Network soon.  So, help the fight against hunger and download the app immediately.  It will only take a second to feed someone for a night.