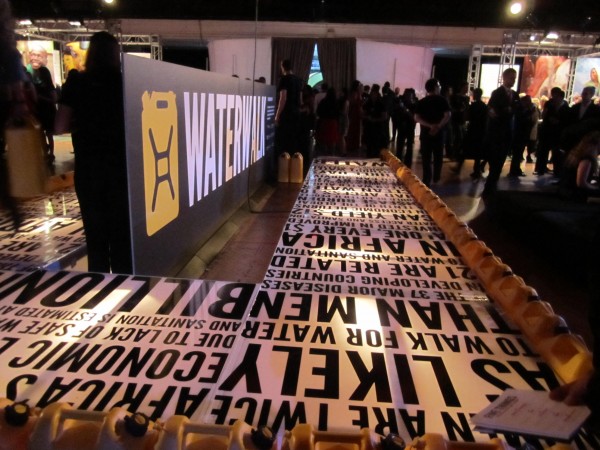 Just when you think Charity: Water can’t top itself, it does. Every turn was exhilarating and thrilling! With over $2.5 Million raised, a room of 2,000+, and more than 200 faithful and kind volunteers,  a spirit of joyful inspiration pulsated through the walls of the 69th Regiment Armory, which carried the symbolism of heroic greatness. The Charity: Ball was more than a success – it was moment of history in the making.

“I am blown away by the generosity, and I had no idea Tyler Perry and ICD International would match the $500,000 raised.” – Charity: Water Founder, Scott Harrison.

Not one penny of ticket sales went to pay for the Charity: Ball, as they had a sea of sponsors from alcohol to car rental services. Some attractions included a photo booth, where guests were invited to strike a pose with a Jerry can (hosted by Ultimat Vodka).  Also, a notorious attraction at Charity: Ball is the Waterwalk. For every person that grabbed two Jerry cans and walked the runway, $100 was donated to Charity: Water to help build wells. We mingled to fresh beats, sipped on cocktails, nibbled on hors d’oeuvres, and danced to support the cause with fellow friends (both new and old).

The highlight of the evening was the auction dedicated to Rachel Beckwith. For her 9th birthday, Rachel set out to raise $300 to donate to Charity: Water. Only a few short weeks later, Rachel sadly died in a car accident. Due to such a tragedy and Rachel’s heroism, fire in the hearts of the Charity: Water community sparked, and Rachel’s campaign ended up raising over $1.2 million. The auction itself was hosted by silver screen star, Jessica Biel and special guest auctioneer, Tyler Perry. The highest bid went for $100,000 to fund Project Schools in Sierra Leone. The second and third highest bids were at $60,000 and $40,000 to fund water projects in Sierra Leone. As well as several $20,000-$7,000 donations, which totaled over $500,000. Tyler Perry offered to match donations if they raised $500,000. He stated to Lifestyle + Charity, “When 100% of proceeds raised goes to dig wells in Africa, I will do anything to help.” One of the show-stopper moments was when Jim Hocking, Director of ICD International (a faith-based organization working in the Central African Republic), made a surprise donation (even to Scott Harrison) by also matching with $500,000. The total funds raised were $2.5 million.

Among the crowd of over 2,000 guests, there were some familiar faces like Sophia Bush, who shared with us her sentiments, “Tonight is incredible. I am so proud of Scott, who is doing so many beautiful things in the world.” Most Eligible Dallas Bravo TV Star, Matt Nordgren, flew out from Texas to show his support. Also in attendance were some of New York City’s finest movers and shakers to cheer on Charity: Water Founder, Scott Harrison. These individuals included designer, Suzanne Rae, Kevin Singleton of Elevate New York, Sarah Appleby (Makeup Artist), Seth Whalen of PTL Staffing & Events, Brant Cryder, President of Yves Saint Laurent North America and Board of Director at Charity: Water, Faith Huckel of Restore NYC, Mike Doyle (Pastor at Movement NYC), and others. Our very own Lifestyle + Charity Editors and Contributors, Rhiannon Pena, Haley Melander, Cara Murphy, and Desiree Frieson lended a hand in volunteering.

Scott Harrison and the Charity: Water family, whose passion, authenticity and hard work left us in awe and filled us with inspiration to continue to get up and do something good in the world.