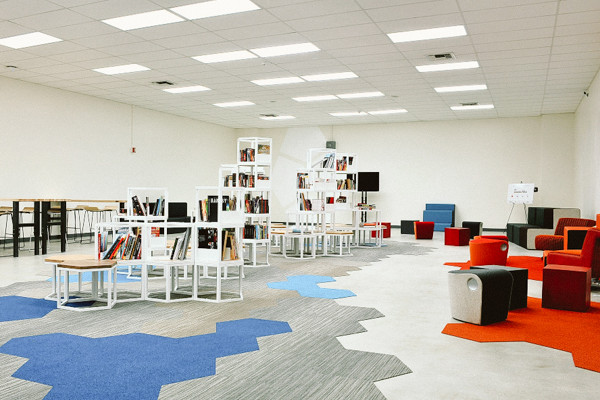 Images via Locke High Innovation Space
Green Dot Public Schools and No Right Brain Left Behind have launched the Locke JetSpace, a transformed public school library in Locke High School in Watts, California. The 3,000 square foot space re-defines the concept of a library for the 21st century, where students can immerse themselves in an environment built for discovery, play, and learning. This is a first prototype space with a goal to produce a blueprint for modular spaces, based on custom designed furniture, tailored content, and community participation, that will allow schools to redesign their underused spaces into 21st century innovation environments.

By inviting existing partners into the space, as well as incubating new solutions, these spaces will serve as playgrounds for innovation within schools and communities, where breakthrough solutions in education are co-created with students and teachers.

“If we can get this model right, it could be scaled to include other schools as part of our national turnaround model,” said Douglas Weston, Director of Development at Green Dot.

Initial content partners in the space include IndyCar Driver, JR Hildebrand, who is working on a new motor sports curriculum, and a collaborative program with Vans Shoes that will focus on students’ creative self expression, while teaching skills in footwear, apparel design, and production. While the first phase of the space design is finished, some of the elements were intentionally left blank to be a canvas for the community to finish and complete its identity.

The aim is to build amazing and scalable learning spaces on a minimal school footprint, that can energize the school, and build on all the other great things a school is doing. The desire is to open the doors of public education and invite partners to plug into these spaces with valuable tools and programming,

The completion of this prototype space was made possible thanks to collaborations with Allsteel, Starbucks, JR Hildebrand Racing, Behr Paint, Goldhirsh Foundation, The Third Teacher+/Cannon Design, Woodsmithe, Shaw Contract Group, LA 2050, the John W. Carson Foundation, and the Marcled Foundation.

About Green Dot Public Schools
Green Dot Public Schools is the largest charter management organization in Southern California. They serve over 10,300 students in grades 6-12 and have sent more low-income minority students to college than any other charter management organization in the country (6,500 students so far). Green Dot is one of the few charters that have done full-scale turnarounds of low-performing middle and high schools.