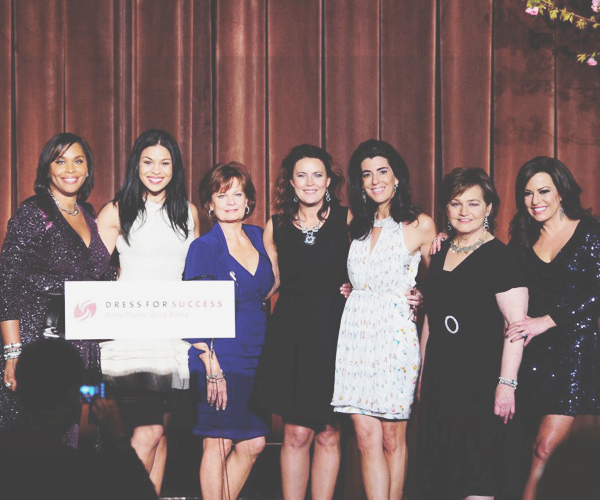 NEW YORK CITY – April 11, 2013 – With over 4,000 in attendance, the charity gala began with a cocktail reception where attendees could sip, mix and mingle while taking part of the silent auction goods.  The ambiance of the reception area was filled with energy, smiles and fashion-forward guests, as they awaited the anticipation of  the Dress for Success gala ceremony. All while guests took sight of the beautiful Jordin Sparks walking the red carpet.

As the reception came to an end, the guest were escorted into the grand ballroom where a tasty salmon salad awaited and guests enjoyed a welcome speech from Joi Gordon, CEO of Dress for Success Worldwide, as she discussed her honor and tribute to the mission. Joi Gordon spoke of when she quit her 6 figure job in a law firm to help start Dress for Success in a basement.  Guests were then able to embrace the mission of Dress for Success by listening to Mishol Randolph, a Success Ambassador as she spoke about her life as a narcotics user to becoming part of Dress for Success and now having a striving and successful life. The night continued as 50+ volunteers came into the ballroom with yellow balloons for guests to pledge for support. Over hundreds of  balloons filled the room as each balloon symbolized a donation made. Lastly, a toast to the Mothers Tribute was made from daughter Jordin Sparks to her mother (Jodi Sparks) as she spoke with tears in her eyes of what her mother was able to do for her career and ended signing a beautiful song.

Dress for Success Something To Share Gala was a tribute not to only honor the dedication of what the 16 Success Ambassadors had proven to remain on the path to professionalism, but also the dedication that the team of Dress for Success has been able to bring to these women. From supporters, corporate sponsors, conscious do-ers to the Success Ambassadors, everyone in attendance knew exactly why their attendance and support mattered – to help transform and encourage women to not only dress to impress but to Dress for Success.

“The stories that these women will share during our gala are just 16 of the 650,000 that we have been a part of shaping since Dress for Success began in 1997, but represent the undeniably determined and dedicated character of our women,” said Joi Gordon, CEO of Dress for Success Worldwide.  “We hope that through this event that everyone in attendance will find a reason in each season for change, and experience how their support of Dress for Success helps make each of our women’s potential future a reality.”

Learn More About Dress for Success
The mission of Dress for Success is to promote the economic independence of disadvantaged women by providing professional attire, a network of support and the career development tools to help women thrive in work and in life.