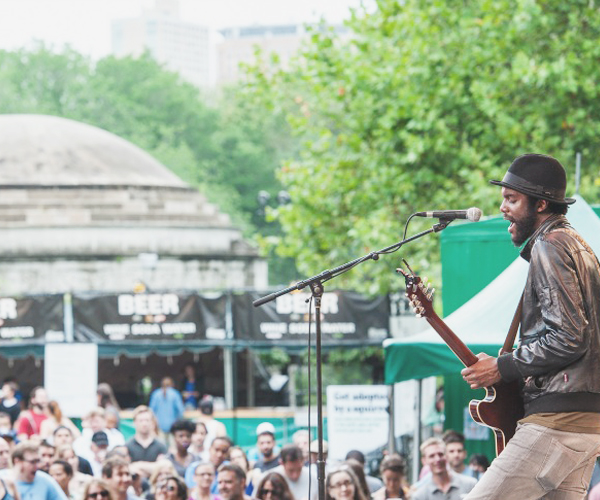 If you are looking for an escape from the hot and crowded city streets without actually having to leave Manhattan, search no further. The SummerStage festival gives you the chance to enjoy the great outdoors while listening to your favorite music in an uncommon venue – New York City’s parks. SummerStage is a fun and inexpensive option to add to your NYC summer bucket list, as it exposes New Yorkers to hundreds of free performances and highlights top talent in the music industry.

SummerStage is a program run by the City Parks Foundation – a nonprofit organization to create programs in parks across all five boroughs of New York City. While SummerStage originated in Rumsey Playfield in Central Park, the festival has expanded in recent years to include performances in parks around the city. Performances embrace a wide variety of musical talent, and with artists represented from several different genres and cultures, there is something for everyone. This year’s highlight acts include Joan Baez/Indigo Girls, She & Him/Camera Obscura, Ben Howard, Jimmy Eat World, and more.

Ben Howard performed with opening act Michael Kiwanuka on the last Monday evening in July, and the show sold out the Rumsey Playfield venue. This particular SummerStage venue is filled with different food and drink stands from local restaurants, as another way of exposing attendees to NYC culture.

After waiting in line for brick oven pizza from the Pizza Moto truck and grabbing a drink from the City Winery stand, music lovers gathered together and relished in the break from this summer’s heat wave. While some of the more dedicated Ben Howard fans pushed to the front of the stage to sing along with the setlist they knew by heart, many others were content with laying out on picnic blankets towards the bank of the venue and simply listening to the music.

British singer-songwriter Ben Howard put on a terrific show – he mixed in his laid-back, summery songs like ‘Old Pine’ with some other more new and upbeat songs that had the crowd bobbing their heads and singing along. Howard and his band, including female member India Bourne who impressed the audience with her performances on bass guitar, drums, AND the cello, delighted fans with their appreciation for the turnout as well as for the city’s benevolence in general. Ben Howard’s smooth guitar sound, along with perfect summer night weather, made for a wonderful evening in Central Park.

SummerStage is just one of many programs that the City Parks Foundation uses to encourage culture and community-building in its parks.  The organization also runs many free educational programs such as sports instruction, nature courses, and gardening activities – all of which can be hard to find in the urban jungle that is New York. In such a busy and bustling city, this program helps bring people together while providing them with a natural and unique way to experience culture in Manhattan.