With Matt Damon We Strike! Take A Stand for the Water Crisis 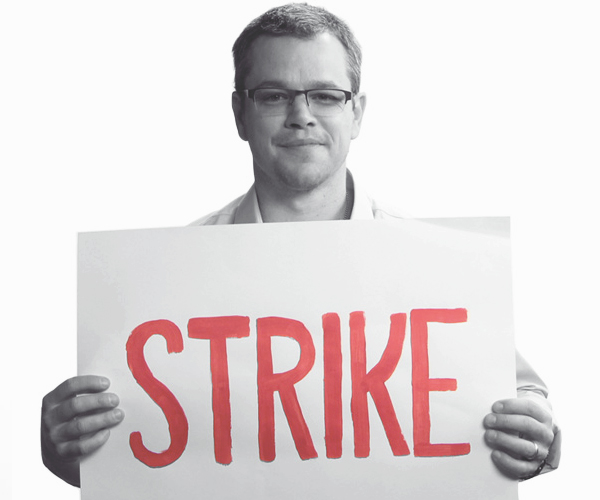 Academy Award winner Matt Damon, co-founder of Water.org, took up a very unlikely challenge, striking against going to the bathroom until everybody in the world has access to clean water and decent sanitation.

Strike With Me is a campaign designed to help take a stand for the water crisis. 2.5 billion people around the world do not have access to a clean, private toilet and many more lack clean water. This issue has reached global concern with facts such as, “every 20 seconds, a child dies from a water-related illness” and “more people have a mobile than a toilet”. Water.org , Google, Hollywood, and social-media creators have all come together to reach out and motivate people through a series of YouTube videos that will help revive and put into action the stalled Water for the World Act, which would ultimately increase funding for water projects in Asia, the Caribbean, and Africa.

Through humor, celebrities and social media, Matt Damon hopes to raise awareness and inspire people to make a difference by either directly impacting the cause by donating or spreading the word to friends, family and the world through different mediums. Celebrities such as Stan Lee, Jessica Biel, and Jason Bateman have joined forces to show their support and strike alongside Matt Damon.

With Strike With Me’s original goal of $10,000 and hoping to serve at least 400 people with safe water, the campaign was able to raise $78,787 and serve 3,151 people in just a little over a month! This campaign is a perfect opportunity to show how community involvement can change the world and how social media can be used as a vessel for greater things aside from just recreational use.

Show your support through your favorite social network sites using the hashtag #STRIKEWITHME or by donating at Water.org. It only takes $25 to give someone clean water for life, a small price to pay to change someone’s life. Think about it.

Water.org Gives Back
Water.org has an unbeatable track record of successful water projects in countries such as Honduras, India, and Africa. By bringing water systems to these places, they have improved lives of thousands of people. They also help address good hygiene practices and access to sanitation facilities to help improve the health of the communities. Water.org even gives opportunities to anyone who wants to fund raise and donate to help the cause.

Learn more about Strike With Me
Connect via Facebook