The Me N Ma Girls: Finding Their Voice

By Christie Drozdowski  •  8 years ago 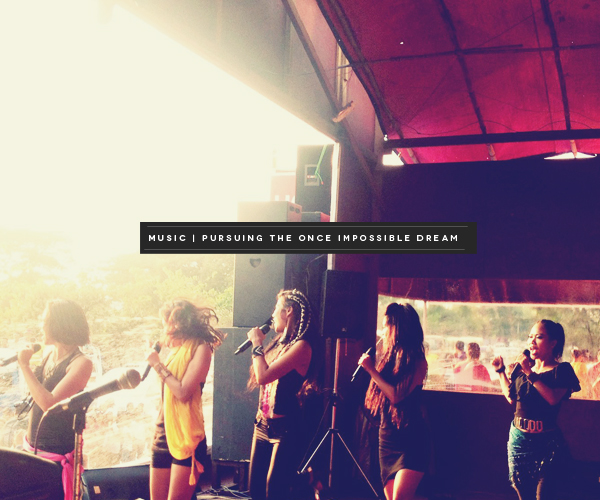 Individuality. Style. Originality. These are all things you’d expect from pop music, right? But what if you are the first original girl group in your country and you get told by police that you can’t even wear a colored wig? There’s no room for Nicki Minaj then.

This is what the Me N Ma Girls, the pop act from Myanmar (formerly Burma) have had to face. It’s only been in the last year or so that they have had the freedom to express themselves through their music. It’s the struggles they’ve endured under a military junta and growing up as girls who are not only trying to be artists but women in a sexist country that bring them together and make their music impactful.

The group’s message can almost entirely be taken from their name. Me N Ma is a play on their country’s name, Myanmar. They are a sisterhood to whom “in their hearts, the single most important thing in all of this is opening up their beautiful country to the world” says Daniel Hubbert, the band’s manager from their recording company Power Music, Inc.

Their new recording label is based out of Los Angeles, so even though crossing over to the Western/American music industry might be a challenge, they have high hopes in reaching radio and TV play throughout the world. “They are not perfect. They are raw. The real deal,” said Hubbert. He says this sort of authenticity resonates with dedicated fans.

The group of five write their own songs, which is different for most artists in Myanmar who gain publicity by covering popular Western songs. They are all young women in their 20s so their lyrics center around love, loss, and a desire to be known. They’ll be flying to LA soon to shoot the music video for their new single “Girl Strong,” which is their first western style, all English single. They will always record tracks in their native Burmese language, but singing in English is one way to introduce them to the rest of the world.

They’ve already gained popularity in Malaysia and Singapore, more so than in Myanmar. This is due to Myanmar’s present lack of steady media. When the Me N Ma Girls were flown to NYC for the Women in the World Conference back in April, their country’s media outlets started to recognize their influence and potential.

Along with Myanmar’s new freedoms, the group has paved the way for other bands that were formerly underground to start performing regular gigs.

They have more to offer than your average pop group. They are more than just Myanmar’s version of the Spice Girls. “The Me N Ma Girls have a depth and perspective, brought about by cencorship and sexism in their country, that gives them an edge,” Hubbert said. “They are all deeply spiritual as well.”

Fame and success, to them, isn’t about money. It’s about pursuing the once impossible dream of being an artist and having something to say to the world.

Check out their single “Girl Strong” on iTunes, and listen out for a club mix soon. The catchy dance tune with the lyrics “get out of my way, because I’m a fire ball that can’t be tamed,” might be your summer 2013 anthem.