Girl Rising – A Film About Educating Girls & Changing The World 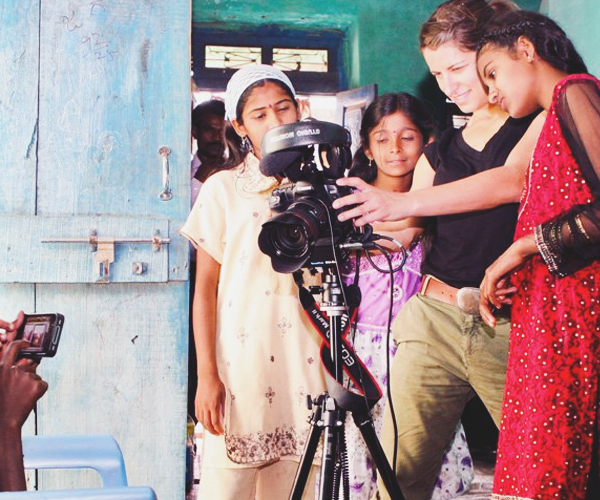 Tom Yellin, Executive Producer of Girl Rising, a film about educating girls and changing the world, came to IIRR’s screening of the movie on March 9th to speak to our supporters about the making of the film. We had very limited time at the theater, so I sat down with him last week to ask a few more questions about the process and the film itself.

BP: What inspired Girl Rising?
TY: What inspired it, really, was the experience […] The greatest experience you can have as a journalist is to discover something that is deeply and profoundly true, but people don’t know it. Years ago, we discovered something that was well-known in the world of development, which is to say if you can educate girls, get them in good schools and keep them there throughout adolescence, then everything changes for the better. Not just for the girl, but for her family, her community, her country, and broadly, for everybody. Indices of world problems shift very powerfully in a good way when girls are educated. All the good things that happen, happen more, and so on. It was just so overwhelming we almost couldn’t believe it. How come no one is talking about this? We had to figure out how to tell the story, but more importantly, figure out a way to motivate people to act. In this case, we felt a profound responsibility to do something; we felt a responsibility to tell people.

BP: How did you pick the girls involved?
TY: We didn’t pick the girls. The girls were chosen by writers that we picked from each country to tell the stories. The girls had interesting life stories, and we selected a subset of girls that were really interesting. In almost every case, the writers chose a different girl than we thought they would choose.  We wanted authentic stories and authentic voices. We believed that the storytelling should come from the culture, not from us. And the best way to do that was to pick writers who shared cultural roots with the girls and that they chose compelling stories to tell.

BP: How then did you decide which girls to put in front of the writers?
TY: We went through a long journalistic process – meeting many girls and interviewing them about their lives, hopes, dreams, and families. Some strike you in ways that feel really compelling. That’s what you’re trained to do as a filmmaker and journalist; to identify interesting characters.

BP: How did you choose the writers?
TY: That was hard. There were countries we wanted to go to where we couldn’t find writers that fit. I should also add that we worked through NGOs that have become our partners. We didn’t go out and put up a sign [looking for girls], as that would have been weird. We worked through the organizations that have programs that girls are engaged with. That’s how we got the broadest set of girls. We chose the writers by reading their work. Then, by meeting them and then by begging them. We felt that the writers couldn’t really understand what we were asking until we really engaged them. In every case, we think they found the process to be enormously rewarding.

BP: During the film, particularly with Wadley, we’d see a camera crew filming Wadley being prepared for the next scene or picture. Is every girl that’s featured the real girl, or are they actresses?
TY: All but two girls’ stories are portrayed by the girls themselves. The girl from Egypt- we felt that her identity needed to be protected because Egypt is hostile for women and girls.  We also wanted to protect her since she was victim of violent sexual crime, and all victims of that kind of crime should be protected. Also, Afghanistan is very dangerous as a girl [so that girl is portrayed by an actress]. All the other girls are themselves. They are acting in a screenplay constructed from their own lives. It’s an interesting dynamic; it’s the real girl, but in some stories, like Ruksana’s, the Indian girl, the mom and the dad are actors playing the part of her parents.

BP: How did you get all of the famous people involved?
TY: It was hard. The answer is that we went to them through the people who represent them. The first person was Meryl Streep. We also knew that whoever we got first would set the bar. The first question we were asked was always, who else is involved?

BP: What do you hope the outcome of the movie will be, and how will you measure its success?
TY: We don’t hope the movie, by itself, will do anything. But we hope the movie will be used in a larger movement called 10×10. The campaign is designed for impact. First, change people’s minds and change the way people think about the value of a girl. If you change the way people think about the girl, then you can ultimately change their behavior. We also want to change lives by directing resources to girl-focused programs on the ground. Generating financial support and allowing tools to be used by our partners, who raise money to ultimately help our partners scale up and change people’s lives from around the world.  Lastly, we want to change policies, to change the rules. We are working to get this message in front of the world.

We have our theory of change [Change minds, change lives, change policy], and we are measuring the results in a quantitative way, using an organization called Mission Measurement. [We are measuring the] reach of the film and content created. How can we measure attitude change? How much money is being generated, and how is it flowing to action on the ground? We are working hard on the last part of our theory of change; the enforcement of laws or law changes. We are very focused on measurement and it is a key part of this project. We will be able to tell you soon.

BP: Is this a one-time thing (Author’s note: One-time meaning will the movie be shown again next year or edited to reflect progress)?
TY: YES. 10×10 is designed to be out of business at some point. We hope and believe that the world can, should, and will change.

F R O M   T H E   E D I T O R:
At Conscious, we are inspired by remarkable stories that highlight real human interactions and human dignity, and we call it stories that matter. You can read more stories like this when you pick up your copy of Conscious Magazine. Subscribe today via our Conscious Shop.