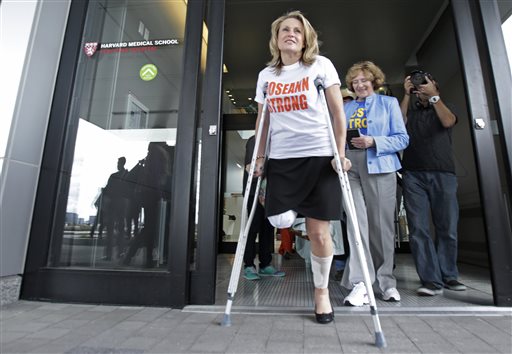 June 20, 2013
Tonight, JPMorgan Chase Corporate will kick off their Challenge race with 12,000 people to raise support for One Fund Boston.

The One Fund Boston was formed to assist victims and families affected by the tragic events at the Boston Marathon on April 15, 2013 and in the days that followed. In the weeks after the Marathon, through the incredible generosity of thousands of individuals, foundations and corporations, One Fund Boston has raised more than $50M for the victims and the families.

The last time Roseann Sdoia attended a road race, terror shattered the course and left her with a leg amputated above the knee. Tonight, she’ll be back to sound the starting horn as racing returns to downtown Boston.

“I have mixed emotions because I should be there running, but I’m not,” said Sdoia, 45, who has undergone three surgeries since the April 15 Boston Marathon bombing that killed three and injured more than 260 people.

Tonight’s 3.5-mile J.P. Morgan Corporate Challenge race, which starts at 7:20 p.m., is one of the first organized competitions in downtown Boston since the terrorist attack. It begins at the Boston Common and runs parallel to the last mile or so of the marathon course. For many participants, the event is an emotional return to a neighborhood devastated by the twin bomb blasts.

“The race itself symbolizes a lot of the running community and the Boston community coming together and really slowly taking back the city and taking back running,” said Cara Bednar, 28, who finished the marathon in under four hours, about 10 to 15 minutes before the first blast.

About 12,000 people from 569 companies are registered for tonight’s race, said Erich Timmerman, a spokesman for New York-based JPMorgan Chase & Co. (JPM), which is organizing the event. JPMorgan, the largest U.S. bank, is donating all registration fees, about $500,000, to One Fund Boston, which was created to assist victims of the bombings and their families, he said. Continue Reading.