August may remind us that Summer is ending, or that it is time to head back to school, but many, even artists themselves, don’t recognize August as American Artist Appreciation month. While the life of an artist is mostly one of solitude, their work is for others, and this is an important month to appreciate those American Artists who are creating or have created works of art intended to inspire humanity.

Growing up within two generations of professional artists, I was exposed to folk art and local Northern Florida art throughout my childhood. Often, this art spoke to the changing environment, such as the destruction of the delicate Everglades. Two artists from this region, Mark Messersmith and Alexa Kleinbard, stand out to me as environmentalist activists who are able to create and inspire change through their work. In addition to exclusive interviews with them, I connected with New York-based artist Nancy Spero, whose work was featured in a documentary called Protest. Lastly, Chicago-based Time Magazine photographer, Steve Liss.

Alexa Kleinbard
Alexa Kleinbard, whose art is formed out of wooden cutouts brought to life with vivid colors and imagery, has been primarily painting plants since 1994. But Kleinbard doesn’t simply paint pretty plants and flowers, she studies them: their history, their past and present medicinal use, and their healing power. Humble, yet steadfast in her determination to protect the environment, Kleinbard’s work may have its own healing power for our plants. When asked how she inspires others with her work, she said, “when I exhibit my art I hope to inspire others to learn about and protect the corridors that plants and animals live in. I hope that they will in turn write to their Congressman about protecting these places.” To her, plants mean more to humanity than just being vegetation. They help contribute to the air we breathe, the water we drink, and the nourishment we need.

Kleinbard lives consciously beyond her art. In addition to using natural products, composting and volunteering, she considers her most important contribution to be her participation in voting and influencing legislation to protect the environment. Alexa Kleinbard is an artist to admire and appreciate, because not only does she create art that inspires others to advocate for change, but she herself paves the path for change as well. 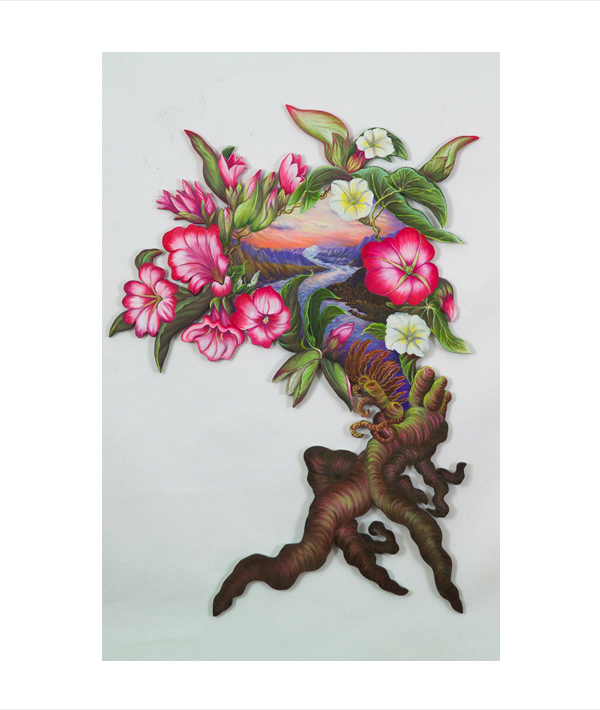 Mark Messersmith
Mark Messersmith, a professor at Florida State University, also paints nature in an effort to explore “themes of spirit and struggle within modern Florida’s natural environment.” Messersmith’s pieces are large, colorful, and extremely impactful. Florida wildlife, such as herons, eagles, alligators and snakes seem to thrash out from their shrinking habitats, which he depicts as overtaken by mankind’s expansion.

The enormity of his work is uniquely juxtaposed with a series of small shadow boxes at the bottom of his paintings. Messersmith told me they are inspired by Medieval Altarpieces. As the viewer moves from left to right, the subjects of the boxes become more “pessimistic,” in Messersmith’s words. For example, he may focus on an osprey’s habitat that becomes increasingly at risk, until in the final box it is all but destroyed. These shadow boxes are not at eye level for adults, but for kids. As a child who grew up looking at these same shadowboxes, this feature I appreciated most. We must join these artists in embracing a change in behavior and gain more respect for the world around us – as Messersmith has aimed to do in his work. 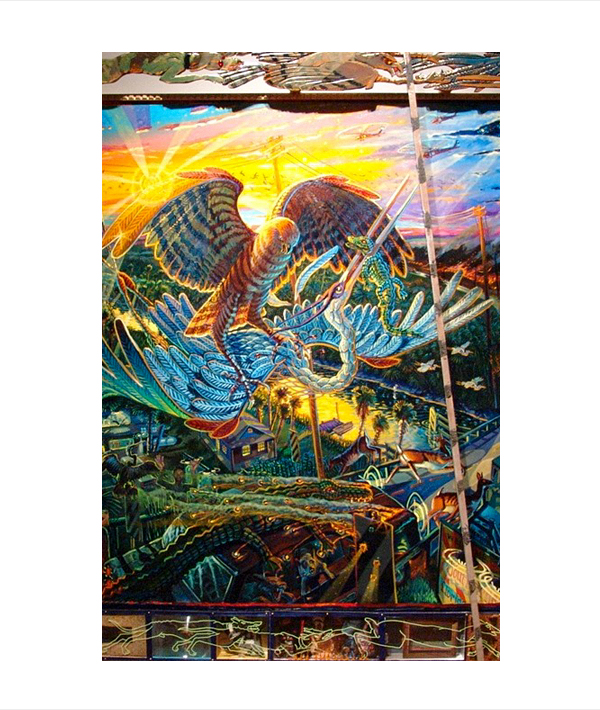 The next artist for spotlight is former New York City based artist, Nancy Spero. Although she died in 2009, she was a modern artist who was against war and in favor of feminism; and her activism was clear in her work. Five years since her death, her art still has every reason to be celebrated.  In her obituary, The New York Times described Spero’s work as “tough, exquisite figurative art  [that’] addressed the realities of political violence.” This same article also noted that one of her works, the “The War Series” (1966-70), “remains one of the great, sustained protest art statements of its era, all the more forceful for its unmonumental scale.” War can be difficult to interpret through art, however Spero embraced it with the goal of offering an outlet for viewers.

Today’s issues of gendercide, brutality against women, and female stigma are alive in Spero’s work titled, “Torture of Women” (1974-1976). Her 14-panel, 133-foot-long work joins figures from ancient art and words from Amnesty International reports on torture to illustrate institutional violence against women as a universal condition. To learn more, you can watch the PBS special documentary, Protest, which shows incredible footage of Spero’s works as well as Ms. Spero herself. If you don’t fall in love with her work, surely you will fall for her incredible spirit, which rises from her small, elderly frame with a ferocity that cannot be ignored. 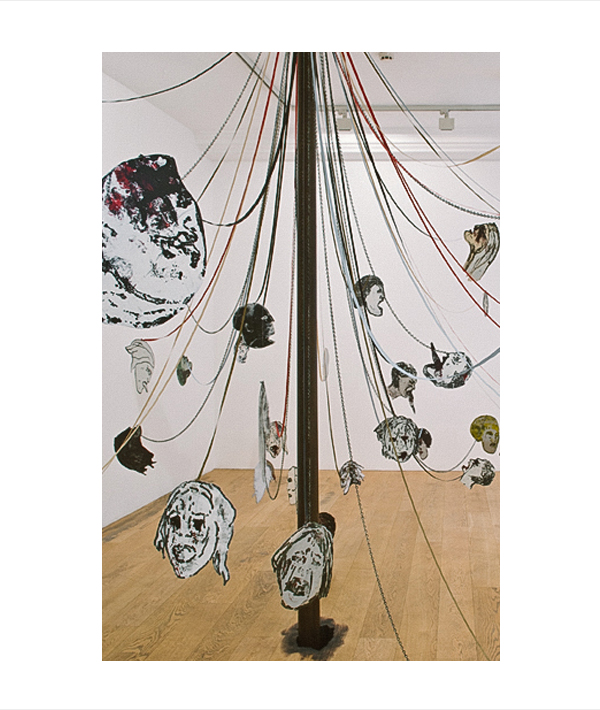 Steve Liss
Finally, an artist appreciation piece wouldn’t be complete without honoring a modern American photographer. Chicago-based photographer Steve Liss, is not only an artist, but also a photojournalist who works to bring awareness through the press. Liss’s photographs have been on countless Time Magazine covers (over 43), and they are images of topics ranging from juvenile detention conditions to autism. Beyond his work for Time, Liss is also Executive Director of AmericanPoverty.org, a non-profit alliance of photojournalists raising awareness about poverty in the United States.

Currently a professor at Columbia College Chicago, Liss is able to inspire the next generation of photojournalists and artists. Shooting in both Black and White as well as Color – both techniques are equally impactful. Some of Liss’s most impressive photographs depict children in bleak adult situations. For example, a minor in a jail cell or smoking a cigarette. American photojournalists are challenged to help shape American opinion and create change, and Steve Liss is doing his part and beyond. 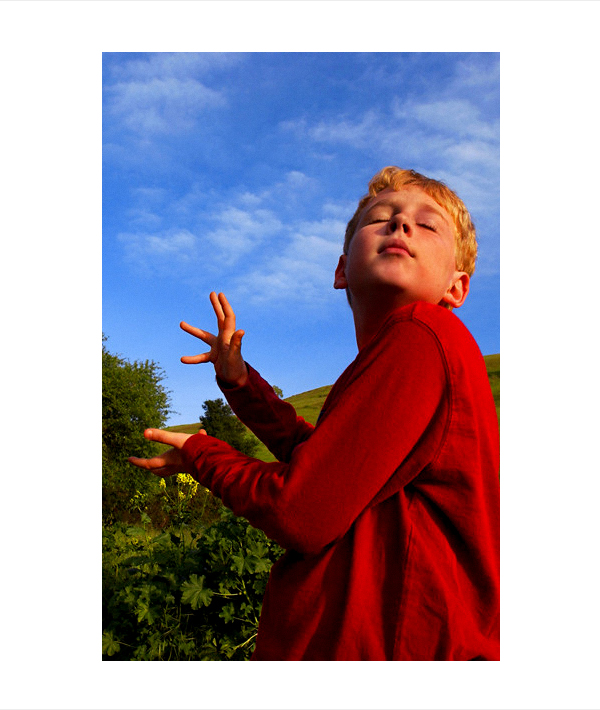 With the saturated and controlled media of today, it can be difficult for artists to achieve recognition not only for their work, but also for the advocacy behind their art. Therefore, let us take some time this month to explore and appreciate art that doesn’t necessarily stand out on a magazine cover or in a documentary. Rather dig deep for your local American artists whom you may uncover as making a difference in your world and share them with us.